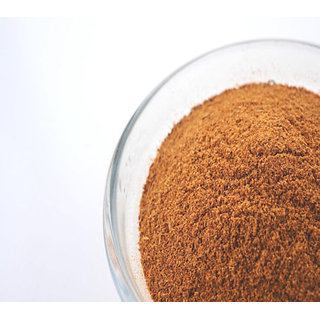 More information about the product:

Cinnamon is the inner bark of a tropical evergreen tree. Cinnamon comes in 'quills', strips of bark rolled one in another. The pale brown to tan bar strips are generally thin, the spongy outer bark having been scraped off. The best varieties are pale and parchment-like in appearance. Cinnamon is very similar to cassia, and in North America little distinction is given, though cassia tends to dominate the market. Cinnamon is also available ground, and can be distinguished from cassia by its lighter colour and much finer powder.

Culinary Uses" The flavour of cinnamon is quite delicate and aromatic more delicate, thus is used more in dessert dishes. It is commonly used in cakes and other baked goods, milk and rice puddings, chocolate dishes and fruit desserts, particularly apples and pears. " It is used in curries and pilaus and in garam masala. " It may be used to spice mulled wines, creams and syrups. " In Mexico, cinnamon is added to tea and brewed.How to storeWhole barks of cinnamon will keep their flavour indefinitely. Unfortunately it is difficult to grind, so for many recipes the powdered variety will be preferred. Like other powdered spices cinnamon loses flavour quickly, so should be purchased in small quantities and kept away from light in airtight containers.Health Benefits" Recent studies have determined that consuming as little as one-half teaspoon of Cinnamon each day may reduce blood sugar, cholesterol, and triglyceride levels by as much as 20% in Type II diabetes patients" It is mildly carminative and used to treat nausea and flatulence." The essential oil of this herb is a potent antibacterial, anti-fungal, and uterine stimulant