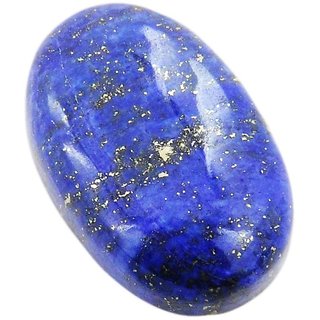 Lapis Lazuli or Lajward is a Semi Precious Gemstone is be used by astrologers to nullify the malefic effects of Planet Saturn, so can also be used as an substitute for Blue Sapphire or Neelam. It is Dark blue in Color with traces of Golden lines over it. It is said to overcome depression and laziness or dullness. Also is very significant to people prone to accidents. It is an Opaque Gemstone. Lapis Lazuli / Lajward Stone is suppose to have great positive effects on the people from dance, drama, theatre, art, poetry, music, educationists, politicians, and any other profession where one needs to win heart of their customers. Lajward Stone is said to overcome depression and laziness or dullness. Also is very significant to people prone to accidents. A gemstone of love friendship and truth hence enhances trust, loyalty, eliminates negative emotions. Lapis Stone is supposed to be helpful in depression, allergies, problems related to eyes, throat. Actually, it is a stone that is of significant use in opening the 3rd eye chakra & also provides balance to throat chakra. Lapis Lazuli remains as one of the most popular and desired stones since its discovery, way back in ancient history of man. It claims to be the stone that combines the power and honour of the gods, kings and common man alike. Not only this, the stone has an exceptionally beautiful colour and goes well in all sorts of jewellery, accessories or without any such complementary things. The stone patronizes numerous Gods, including Greek Goddesses Athena, Aphrodite and Hera, along with Egyptian Goddess Nuit. It goes well with the star sign of Sagittarius, although it is not associated with any of the traditional birthstones. The stone is perfect for people who were born between February 19th and March 19th. he stone holds is beautiful intense blue colour to be its trademark factor. The stone has its rich legacy associated with it, and is believed to do wonders when worn with gold. The stone was possessed by kings and other people of the upper strata since ancient history since it was believed that it possessed really powerful protective powers of the bearer and was a symbol of pride and glory.The gemstone bears great healing powers. It is having great vocal and audio powers and is said to set your tone right for better oratory power and fineness. Thus, it is deemed to be very important for singers. It is also considered a valuable addition to mass media speakers and other public speaking individuals. The stones medicinal properties extend on to healing varies infections and septic areas by applying gentle strokes with the stone. It possesses great healing powers for various skin rashes and insect bites or any other sort of infection. The stone is said to specifically benefit women who are having any sorts of problems or irregularities in there skeletal system. Disclaimer: Product colour may slightly vary due to photographic lighting sources or your monitor settings Note: The image has been enlarged for better viewing. Keep it away from perfume, sprays and water.
Service Center Locator Click Here