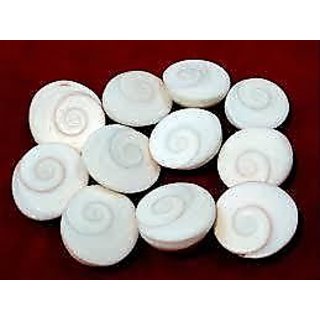 Literal meaning of the word ‘Gomti Chakra’ is a weapon in the form of discus found from Gomti. But actually this is not a weapon, but a miracle of the forces of nature in the form of shell stone. One of the most popular Tantra items, Gomati Chakra is naturally found in the river Gomti.

Just keeping energized and consecrated ‘Gomti Chakra’ with you bestows you abundant wealth, prosperity, good health and harmony. We have found it very effective in warding off negative energies surrounding you, especially useful for small children.

If ‘Gomti Chakra’ is installed after worshipping it along with Goddess Lakshmi at the time of Diwali/ Dipawali and other auspicious occasions, it may not only give you abundant wealth, but it opens ways to stabilize your hard earned wealth.

Not only it is effective in warding off evil energies from children, ‘Gomti Chakra’ also ensures safety of buildings, coupled with smooth and prosperous stay to its residents and users, if it is buried in the foundation stone of the building at the time of construction.

There is very popular tradition in India of keeping eleven Gomti Chakras, after being wrapped in a red cloth, in the containers of rice, wheat and other food items. This ritual ensures food security. Some of our clients have done experiment of keeping ‘Gomti Chakra’ in the same manner in their cash and jewelry boxes and they got excellent results.