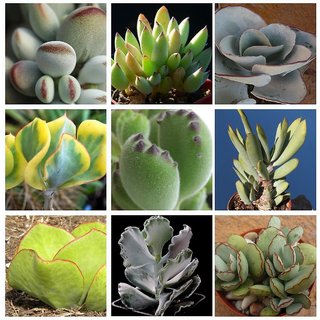 The product is sold by a brand authorized seller who is authorized to sell the brand.

Cotyledon is a genus of the Crassulaceae family. Plants in the genus occur in the Arabian peninsula and throughout the drier parts of Africa, but mainly in Southern Africa.
Members of the genus are shrublets, generally succulent, with fleshily woody, brittle stems and persistent succulent leaves. The leaves are opposite. Leaf pairs generally are oriented at 90 degrees to their preceding and following pairs, as is common in the family Crassulaceae, but the leaf habit differs from say Tylecodon in which the leaves are borne in spirals and are deciduous.
The flowers are pendulous and tubular, borne at the tips of stout, rather long peduncles, mainly in short cymes. Calyx 5-partite, corolla 5-lobed. Petals united in a tube or urn that generally is longer than broad, their triangular tips more or less pointed and recurved, 10 stamens arising from corolla near base and projecting or nearly projecting from the corolla. Gynoecium comprises 5 carpels, nearly or quite free, each carpel tapering into a slender style with an obliquely capitate stigma. Each carpel contains many small (typically less than 1 milligramme when ripe) globular, brown seeds.
Until the 1960s there were about 150 species described as being in the genus Cotyledon.
However, since then it has been split into at least Adromischus, Dudleya, Rossularia, and Tylecodon, leaving probably less than two dozen species in Cotyledon. Of these, about four are characteristically fynbos plants.
Germination Guide:
Sow seed in pots or trays of moist peat/sand mix compost and cover with a very fine sprinkling of compost or vermiculite. Place in warm place, and keep at a constant temperature of between 15-18ºC (59-64ºF). Light is needed for germination. Keep the surface of the compost moist but not too wet . Seal it with plastic wrap or cover top with transparent plastic bag will help maintaining moisture.  germination will usually take 30-180 days, it can take longer, don't give up.