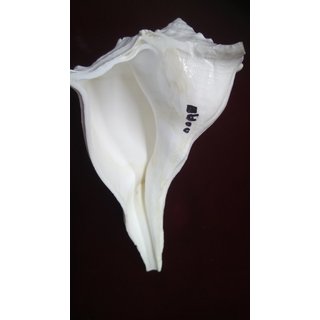 Dakshinavarti Shankh :- The Dakshinavarti Shankh is one of the rarest of conch shells. It is associated with the Goddess Lakshmi, and is commonly seen in almost every visual depiction of Lord Vishnu and Lakshmi, who hold it in one of their hands. The conch shell is considered highly sacred for its property of twisting rightwards, thus pointing southwards and leading to the name Dakshinavarti Shankh. True Dakshinavarti Shankhs are very rare: there are a lot of imitations in the present market – shells which have been created by other species. The Dakshinavarti Shankh is also commonly known as the Lakshmi Shankh, and has been revered in Indian tradition as possessing a lot of rare mystic and beneficial properties. The Dakshinavarti Shankh is signified as signalling towards a lot of prosperity, and is also supposed to be loved by Kubera, the Hindu Gold of wealth. The whiteness of the Lakshmi Shankh is also of special value. The snail species from which the conch comes from, Turbinella pyrum, is found in the Indian Ocean, the Arabian Sea and the Bay of Bengal. Conches, when found from the sea are initially in a dirty green hue covering. Kamal Gatta (Lotus Beads) Rosary / Mala Kamal gatta rosary (kamal gatta ki mala) is also known as dried lotus bead mala. This mala is made up of lotus seeds. These lotus seeds are called as Kamalgatta mala and hence the name of this mala is Kamal gatta rosary. Lakshmi Mantra The word 'Lakshmi' is derived from the root word 'laksha' which means goal or objective. To take a 'laksha' means to take an aim. The Lakshmi Mantra is recited to know your goal and as a means to fructify that goal. Lakshmi Mantra is synonymously also called Money Mantra. But Lakshmi Mantra is a prayer not oly to gain financial prosperity but also to give us the intelligence to enlighten our minds with understanding. Lakshmi is the personification of all that brings good fortune, prosperity, and beauty.                      Truth Of Life  Truth Of Life gives you astrological charts and predictions based on multiple systems like Vedic Astrology, Marriage astrology,Yearly astrology, Krishnamurthy, Daily astrology, Muhurtha, Prashna,Vastu , Gems Recommdation, Numerology etc. It is the first of its kind Book that brings the complete Vedic Astrology system in all its variations to a single place. Truth Of Life provides all features in local Indian language, giving you access to Indian astrology in your own mother tongue.  It is a prolific astrological source for people to help them out from mundane questions to specialized queries. Our aim is to ameliorate those who are facing problems and betterment of humanity using divine science of astrology. Keeping this all-embracing vision in mind, renowned astrologer Jyotish Acharya Vinita embarked AstroSpirit.net in year 2014 to put astrological wisdom for help of ailing mankind. He is an astute and experienced astrologer himself and understands how different astrological systems like Vedic , Numerology, Vastu etc can be applied into different situations to get practically viable results. The AstroSpirit team that works in his guidance consists of Jyotish Acharya Vinita.

Customer images & videos
Please Note: Seller assumes all responsibility for the products listed and sold . If you want to report an intellectual property right violation of this product, please click here.
In Stock
Please provide Best Price credentials
Some text some message..