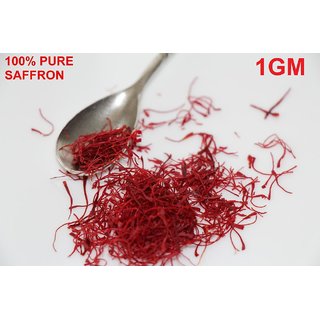 100% original saffron right from the world famous saffron fields of Pampore in Kashmir Valley, J&K, India. Kashmiri saffron is known for its aroma and antioxidant properties. Saffron's aroma is often described by connoisseurs as reminiscent of metallic honey with grassy or hay-like notes, while its taste has also been noted as hay-like and sweet. Saffron also contributes a luminous yellow-orange colouring to foods. Saffron is widely used in Indian, Persian and European cuisines. Sometimes Saffron is also used in Arab and Turkish cuisines as well. Confectioneries and liquors also often include saffron. Common saffron substitutes include safflower (Carthamus tinctorius, which is often sold as "Portuguese saffron" or "açafrão"), annatto, and turmeric (Curcuma longa). Saffron has also been used as a fabric dye, particularly in China and India, and in perfumery. It is used for religious purposes in India, and is widely used in cooking in many cuisines, ranging from the Milanese risotto of Italy to the bouillabaisse of France to the biryani with various meat accompaniments in South Asia.

1. Saffron is helpful in the improvement of digestion and appetite, because it helps in improving circulation to the organs of digestion.

2. Kidney and liver problem: This spice s found to be extremely beneficial for the treatment of kidney, bladder and liver disorders.

3. Saffron is considered as a blood purifier

4. Saffron is effective for providing relief from gas and acidity related problems.

6. Taking a pinch of saffron with milk before bed helps in sleep disorders like insomnia.

9. Saffron improves eye and vision health. Saffron has been reported to significantly helping vision in the instance of cataracts.

10. Massaging the gums with saffron helps in reduce soreness and inflammation of the mouth and the tongue.

11.Saffron is used to improve taste and smell in many food items.