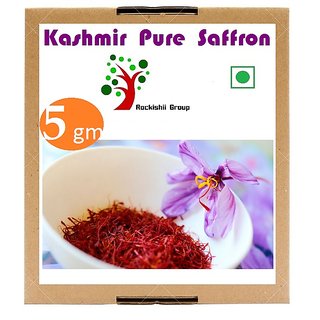 100% original saffron right from the world famous saffron fields of Pampore in Kashmir Valley, J&K, India. Kashmiri saffron is known for its aroma and antioxidant properties. Saffron's aroma is often described by connoisseurs as reminiscent of metallic honey with grassy or hay-like notes, while its taste has also been noted as hay-like and sweet. Saffron also contributes a luminous yellow-orange colouring to foods. Saffron is widely used in Indian, Persian and European cuisines. Sometimes Saffron is also used in Arab and Turkish cuisines as well. Confectioneries and liquors also often include saffron. Common saffron substitutes include safflower (Carthamus tinctorius, which is often sold as "Portuguese saffron" or "açafrão"), annatto, and turmeric (Curcuma longa). Saffron has also been used as a fabric dye, particularly in China and India, and in perfumery. It is used for religious purposes in India, and is widely used in cooking in many cuisines, ranging from the Milanese risotto of Italy to the bouillabaisse of France to the biryani with various meat accompaniments in South Asia.

Saffron has a long medicinal history as part of traditional healing; several modern research studies have hinted that the spice has possible anticarcinogenic(cancer-suppressing), anti-mutagenic (mutation-preventing), immunomodulating, and antioxidant-like properties.Saffron stigmas, and even petals, may be helpful for depression. Early studies show that saffron may protect the eyes from the direct effects of bright light and retinal stress apart from slowing down macular degeneration andretinitis pigmentosa. (Most saffron-related research refers to the stigmas, but this is often not made explicit in research papers.) Other controlled research studies have indicated that saffron may have many potential medicinal properties.

"Mongra" or "Lacha" saffron of Kashmir (Crocus sativus 'Cashmirianus'), which is among the most difficult for consumers to obtain. Repeated droughts, blights, and crop failures in the Indian-controlled areas of Kashmir combine with an Indian export ban to contribute to its prohibitive overseas prices.

Kashmiri Saffron is recognisable by its dark maroon-purple hue; it is among the world's darkest, which hints at strong flavour, aroma, and colourative effect.

Load more reviews
Please Note: Seller assumes all responsibility for the products listed and sold . If you want to report an intellectual property right violation of this product, please click here.
In Stock
Please provide Best Price credentials
Some text some message..