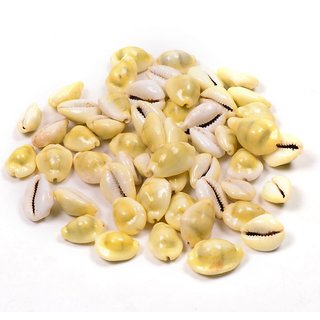 In Hindu religion, yellow kauri is considered very auspicious object. It is believed that it is good for wealth and it holds magical power to fetch financial prosperity.

What Is Done By Yellow Kauri ?

Keeping the auspicious yellow kauri in house lifts up the flow of funds and increase the ability to accumulate wealth which you have been finding hard to do.

It increase the source of income or you may find new customers and clients for investment or finance.

Yellow Kauri belongs to Goddess Laxmi and lord Vishnu and that's why it is considered very auspicious and sacred.

It is also used while performing pooja of Goddess Baglamukhi.

Not only this, but it also controls the malefic effects of planets.

Yellow Kaudi/Peeli Kowdi also known as Yellow Cowrie shells. They are naturally formed shells that are considered rare and sacred

They are used in the worship of Maa Lakshmi and Lord Vishnu. They are also used in tantric sadhna for worshipping Maa Baglamukhi. Lal Kitab has also dealt with many uses of Yellow kauri especially for getting rid of various rinas (debts) in the horoscope

You can install energized yellow kauri in your house on the auspicious occasion of Dhanteras or Akshay Triteeya. You can keep them in your pooja place also so that they can ensure free flow of money. They also help in getting the blessings of Lord Kuber and money is multiplied many times the amount earned.

Cowries are also used as tool to save children from evil and negativity.  Keeping yellow Kauri in your pocket/wallet/purse will also save you from evil eye.