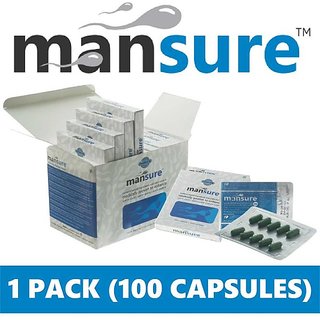 ManSure is a 100% ayurvedic formulation for men. Each box contains ten individually packed strips of 10 capsules each. ManSure is packed with rare ingredients trusted for thousands of years to give you effective results from six potent herbs:

Safed Moosli (Chlorophytum borivilianum), also known as White Muesli, is a traditionally used herb for its benefits in male reproductive health. Safed moosli is consists of saponins, carbohydrates, fiber, alkaloids and proteins that strengthen the immune system. Safed Moosli in ManSure acts as a shukraldravya as it improves the production and quality of shukradhatu.

Ashwagandha (W. somnifera), aka Indian ginseng/ winter cherry is traditionally proven Ayurvedic rejuvenator for males and is proven to increase Serum T and LH and reduce FSH and PRL levels.

Salab Mishri (O. latifolia), also called Salab Mishri, Salep or Orchis mascula, is a super herb known for its beneficial effects in improving male vigor and vitality. Salab mishri in ManSure is a powerful antioxidant which improves the conditions of cells in human body and helps in absorption of oxygen at a cellular level for peak performance.

Gokharu, aka gokshura/ gokhru/ Puncture Vine, medically known as Tribulus terrestris, is an effective herb used in Ayurveda to impact male strength. Gokharu in ManSure is proven to increases production of Lutropin/ Luteinizing (LH) in the pituitary naturally.

Shatawar (A. racemosus), aka Shatavar, Satavar, Shatavari, Sootmuli, Shatamull and wild asparagus, is a well-known and ancient herb in Ayurveda used for thousands of years to promote conjugal family life in men. It is known for its cleansing and healing properties, and contains high concentration of Vitamin C that protects oxidative damage and increases quality volume and motility.