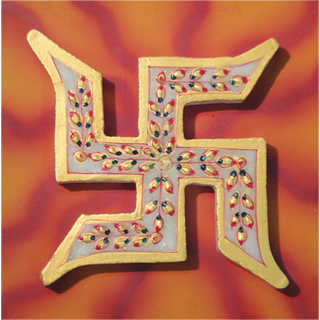 Marble Swastik Mounted On Wooden Board

Marble Swastik Mounted On Wooden Board

This unique auspicious SWASTIK mounted on wooden board is made of single piece of marble and adorned with beautiful world famous floral pattern in auspicious colours- Red, Green & Golden, signifying strength, growth and prosperity. Lends exquisite touch to one’s devotional feelings.
The swastika is an ancient symbol that has been found worldwide, but it is especially common in India. Its name comes from the Sanskrit word svasti (sv = well; asti = is), meaning good fortune, luck and well-being.
In the Vaastushastra, it is believed that ‘Swastik’ counters negative energy and protects the house/premises form Vaastu-dosh (architectural faults) and bring happiness, peace, prosperity, wealth, auspiciousness, progress, name and fame.

Scientific Aspect: In the field of Geomancy “Swastik’’ and “Aum”are considered as prominent emitter of positive energy. Bovis a scientist recognized the effect of subtle energies and started measuring them in units. These energies can be measured on a Bovis scale with a pendulum, with a Lecher Antenna or electromagnetic energy meters. Scientific experiments have shown that ‘Swastik’ has possibly the energy level of 4, 00,000 Bovis

Spiritual Aspect:As per Indian scriptures, swastika symbolize lord Ganesha and it is believed that this auspicious figure is originated from the Lord Ganesha’sbeej mantra “Gang/gamm”. Swastika is one amongst the 108 symbols of Lord Vishnu. It signifies the rays of sun, which are precious for the existence of life. The right side of Swastika represents the rotation of sun, which begins from the Northern hemisphere and then proceeds to east, then south and finally west. The four wings of the Swastik cross point towards the four directions, namely North, East, South and West, which connotes stability, firmness and strength.
In ChineseTaoism, the swastika is a symbol of eternity. For TibetanBuddhism, it is emblematic of the element of Earth. It is a common practice for Hindus to draw Swastika symbols on the doors and entrances to their houses during festivals, which is believed to symbolize an invitation to goddess Lakshmi.
Placement: Swastik is ideal for placement on the entrance wall or any eastern wall of your house /office /workplace….