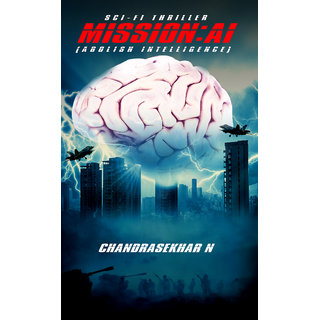 Jai is a CBI officer. He along with FBI agent Smith is investigating the mystery behind deaths that happened across the world. These deaths are unnatural and different. All the victims died because of some extreme medication. Jai identifies that all the deaths have some similarity and suspects some group or individual behind these deaths.

During the investigation process, Jai is asked to work on another assignment about missing businessmen because of a financial crisis across the world. Jai uncovers that businessmen are innocent but before he can prove it, they are put in jail.

At a later stage, China attacks India and Japan. Jai with the help of Smith and Cherry (Professional Hacker) finds out that all these are interrelated i.e. deaths, financial crisis, attack by China. Cherry finds out that A SAINT is behind all this. Rest of the story deals with the mission AI. Who is SAINT? What is the relation between SAINT and Artificial Intelligence? Jai uncovers how all these events happened.

This is a sci-fi psychological thriller that deals with psychological problems (imaginary) that people face, showcases how technology is making everyone as slaves.

Chandrasekhar, called as Chandra by his friends and colleagues , a software professional, Certified security specialist, Psychologist by academics. He is an ardent reader of psychology books, novels.The Mission:AI is his first attempt in writing. He is interested in mentoring and motivating people. Helped good number of people by giving guidance in all possible aspects (Personal and Professional front).