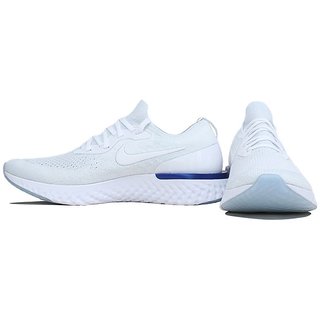 received a formal widespread launch yesterday, but that doesn’t mean the sneakers are exactly easy to come by. Of the five men’s and women’s styles released yesterday (“Black/Dark Gray/Wolf Gray,” “Black/Racer Blue” aka “Triple Black,” ”College Navy/Racer Blue/Pink Blast,” “White/Racer Blue/Pink Blast” and “Wolf Gray/Cool Gray/Pure Platinum”), several colorways are already completely out of stock on Nike’s e-commerce site, while others have only scattered sizes remaining,Our first glimpse at the Nike Epic React Flyknit “True White” came earlier this spring, however, with its release date now confirmed, we thought to take another look at this boldly-hued runner. Nike’s Flyknit tooling dresses much of the upper, with a rash of signature tones, including Black, “Pure Platinum,” “Bright Crimson” and “Volt” used to jazz up its clean white base. Aside from the eclectic color palette, other notable features include the uniquely-grooved React midsole, gradient outsole design, branded heel counter and wavy eyestay detail, amongst others.