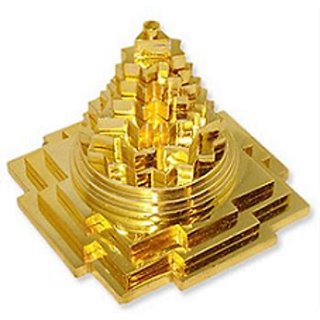 Sriyantra - Sriyantra is One of the most auspicious, important and powerful Yantra. Its archetypal form is a ladder of spiritual ascent for the seeker. Viewed from the center outwards, the Shree Yantra is a diagram of the Hindu vision of the evolution of the cosmos. Through devotion and faith, the Shree Yantra blesses the worshipper with peace, happiness, popularity, power, authority, wealth, prosperity & success. This ancient Yantra has been used for millennia by kings, princes, political leaders & men in authority for attaining fame, power and financial success. It is considered to be beneficial to humankind especially during Kali-Yuga to help achieve success, well being, good fortune, wealth and fame.

The Shree Yantra in the 3 Dimensional Meru Type is popularly made in Panchdatu Meru prushtha Shree yantra and is a multi Pyramid Cosmic Grid signifying unlimited abundance and positive powers.This is Multi pyramidal Geometry

With 7 pyramid steps sriyantra brings in tremendous amount of Affluence, Abundance and Harmony “Shree” meaning “Wealth” and “Yantra” - Meaning “Instrument” -”The Instrument for Wealth”. The Shree Yantra brings about material and spiritual wealth.

In the cosmos there are three states-Creation, Establishment and Destruction and these are represented by the three circles in the Shree Yantra which in itself is the symbol of the universe or cosmos. When this circle is the elevated it stands as a symbol of SumeruMountain balancing the whole universe and it contains of all the worlds situated in the SumeruMountain, as described in Puranas. It is called “Meru Prastha Shree Yantra” and is the best of all.

Shree Yantra is the worshipping place of the form of the super goddess, Mahatripur Sundari. It is Her divine abode. All the 33 crores gods and goddesses are worshipped in it and all other religious adorations are done here. It includes all the conducts, all the learning and all the elements. The fruit of benefit which is gained after performing duly one hundred Ashvamegha Yajnas, that can be acquired only by having a sight (vision) of the Shree Yantra

Arrange all items of blessings after having a bath in the morning with pure mind and soul.

1. Panch Amrit(Milk, Ghee,Curd,Sugar, honey) and also gangajal water should be offered to the yantra.

2.   Sandalwood paste or chandan must be offered to the yantra

3.   The Sadhak must keep in mind the particular Ishat(mantra) while performing the puja. One should take flowers in both hands and offer the yantra while reciting the Beeja mantra

4.   Unbroken rice or white flowers should be offered.

5.   Incense sticks and diyas or lamp must be lit with the chanting of the aapropriate mantra.

6.   Fruits, betel nuts and betel leaves are to be offered.

7.   Place the yantra in front of your isht dev and also resepctive God of yantra and start chanting the mantra of respective yantra indicated at least for 11, 21 or 108 times.