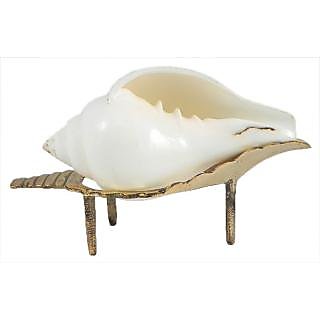 Jal Shakha are real conch-shell, it is having ritual and religious importance in Hindu religion & even in Buddhism. It is the shell of a large predatory sea snail, Turbinella pyrum, found in the Indian Ocean. In Hindu mythology, the shankha is a sacred emblem of the Hindu preserver god Vishnu. It is still used as a trumpet in Hindu ritual, and in the past was used as a war trumpet. The shankha is praised in Hindu scriptures as a giver of fame, longevity and prosperity, the cleanser of sin and the abode of Lakshmi, who is the goddess of wealth and consort of Vishnu.

“Shankham” comes from the two Sanskrit words “Shum” which means something good and the “Kham” meaning water. Hence the meaning of “Shankam” is “The conch holding the sacred water”.

This shankh stand is made up of heavy brass and is crafted to carry grip diverse Shankhs, For instance- Heera Shankh, Ganesh Shankh, Dakshinavarti, and more. This Brass Shankh Stand is made in heavy brass and is designed to hold varied Shankhs such as Dakshinavarti Shankh, Heera Shankh, Ganesh Shankh and more. The Brass Shankh Stand is to be kept in the East corner of your home or Puja Altar with the Shankh.

The images represent actual product though color of the image and product may slightly differ.