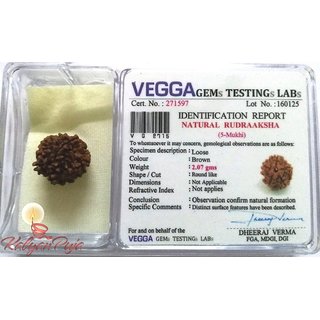 5 Mukhi Rudraksha is the symbol of Five Pandava. The person who wears this Rudraksha will extraordinary in all field i.e. Intelligence, strength, business, money, devotion to shiva, beauty, smell, touch, words, devotion to parents wife sons, truthful, love etc. This Rudraksha keep the wearer always on the path of Truth and makes him wealthy.

5 Mukhi Rudraksha controls five elements i.e. Agni (fire), Jal ( water), Vaayu (Air), Aakash( sky), Prithvi( Earth) in the body of the wearer therefore kills all diseases in all the weathers. This Rudraksha is to be worn on Thursday after Siddhi.

Five Mukhi as per the various Puranas :

Its ruling planet is Jupiter. It is the form of Rudra named Kaalagni. This represents Lord Shiva, the symbol of auspiciousness. The wearer of five Mukhi mala gains health and peace. Five Mukhi Rudraksha monitors blood pressure and cardiac ailments. Five Mukhi mala is also used for Japa. By wearing the mala the wearer-s mind remains peaceful. There is no suspicion about the fact that the wearer of Five Faced Rudraksha mala never gets untimely death. Malefic effect of Jupiter is considered to cause lack of peace of mind, utter poverty, lack of harmony, diseases of fat, Kidney, thigh, ear, diabetes etc. Five Mukhi is therefore suggested to sublimate the malefic effects of Jupiter. Agni (fire) purifies the metals and similarly five faced Rudraksha rectifies all the vices and faults of Jeeva and makes him pure and Jeeva gains the form of Pashupati i.e. the Lord of all creatures after becoming free from the animal instincts. By wearing its mala the wearer?s mind remains peaceful. A mala of five face Rudraksha is also worn. It keeps the blood pressure normal.

And the fear of untimely death disappears. If three beads of Five faced Rudraksha are dipped overnight in water in a glass and the water drank in the morning on empty stomach, then the person gets free from blood pressure and related illnesses.

Taking three beads of 5 faced Rudraksha equal to the size of Amla and string in red thread. It should be worn after touching it to Shivling. At the time of wearing it, the man should keep on chanting : "Om Namah Shivaya".