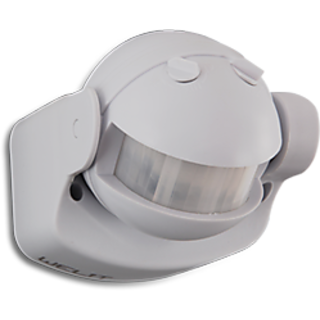 Shop Online PIR wall mount motion detector at Shopclues with a price guarantee and fast delivery time in India Product Id : 5603656
Be the first to write a review
₹1,045 ₹1,200 12% off

IR W3140 is a wall mount infrared motion sensor. The specially designed reflector gives it coverage angle of 140° with an angle of aperture of 90° and maximum reach of 10 meters.

Motion sensor is an intelligent device which controls the ON-OFF operation of electrical loads. When it detects motion inside its detection area, it automatically turns the load ON. It turns OFF the load after preset time delay if no movement is detected for the set time.

It provides artificial light only when it is needed. This reduces the large amount of energy wastage and helps in making the most energy efficient lightings.

IR W3140 is a wall mount passive infrared motion sensor. The assembly of highly sensitive pyro-sensor and specially designed reflector provides the unmatched coverage of 140°. It detects heat radiated from a body. Segmented lenses divide the whole detection area into passive and active zones. When any warm object like human body moves between the zones, it is detected as a change in voltage by the pyro-sensor. When it detects such movement, it triggers the switching mechanism to operate the connected load.

Mounting height: With the increased mounting height, the detection area increases and sensitivity to detect the movement is reduced. Hence the product must be installed at the optimal mounting height to suit the particular application.

Avoid exposure to direct light. This may disturb the operation of photocell and it might not able to measure the correct ambient brightness level.

Do not place devices that radiate heat inside the motion sensor’s detection zone.

Minimum distance of 50 cm should be maintained between the light and the motion sensor, since the heat radiated from the light source could result in false triggering of the sensor.

Two settings are available to adjust the operation of the motion sensor to suit the particular application. These setting can be altered any time. The last setting will remain stored in the system in the event of power failure.

This threshold value of lighting level can be set with the help of twilight setting knob. Set the knob fully anticlockwise to set the minimum Light level of 10 L. This will turn ON the load by movements only when the ambient brightness is very low, hence during the night time. To set the maximum L level of 2000 L, set the knob fully clockwise. This will turn ON the load by movements even in the full ambient brightness condition, i.e. even during day time. Similarly intermediate settings can be done by adjusting the knob accordingly.

There is no clock inside the system. Hence motion sensor decides the time based on the ambient light level.

When motion sensor detects any movement inside its detection area, it automatically turns the load ON. It turns OFF the load after preset time delay if no movement is detected for the set time.

Follow the below sequence for required time and Light settings.