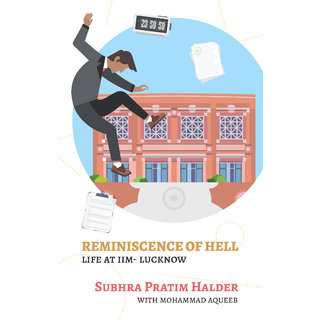 WHY IS IIML CALLED HELL?

Is it a mere metaphor or are there deeper connotations lying within? What does it take to survive the most rigorous academic curriculum of your life?

Presents you an narrative memoir that every student on IIML campus goes through -  the anxities, the quests, the self-doubt, the affirmations, the conflicts, the realizations and much more.

With ever-changing narratives and realizations about self, what gets changed for you, apart from the definition of success?

Find out more in the 'Reminiscence of Hell'.

a) The Euphoric Countdown

b) The Inceptive Turbulance

c) The Road to Summers

d) Rising from the Ruins

f) To the stars and beyond

h) To Life and Freedom

About the Author: Subhra Halder is an IIML graduate of 2018 and a budding marketer in career. This is his debut novel, envisioned by his friend and batch-mate, Mohammad Aqueeb.

A two-time national winner in essay writing, Subhra is a writer at heart and has been felicitated by the NHRC New Delhi, Former CJI (Dr. K.G. Balakrishnan) and Indian Student Parliament,Pune for his literary works. He was part of the institute’s Media Cell and was elected as the head of IIML Senate during his MBA days.

Being an active observer and proponent of campus-affairs, Subhra has witnessed countless transforming stories that makes IIML, much more than just an institution of repute. It was his major missing that culminated into the idea of writing a book, which could serve as an instrument of purpose for aspirants and bring an element of nostalgia and home-coming to all its alums.

Reviews are solicited and can be addressed to subhra.halder@iiml.org