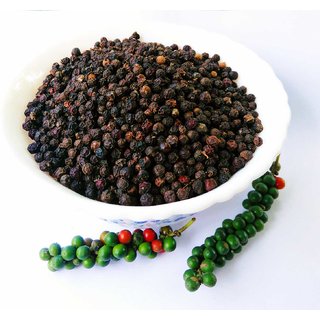 Black Pepper is known as Black Gold and Kerala is a leading producer of Black pepper since ancient times. Pala, Meenachil Taluk in Kerala had trade links with Middle East, London and Rome. The Arabs, Portuguese, Syrians arrived in Kerala for the spices. Pala is famous for the production of Natural Rubber and Spices. A particular brand of "Pala Pepper" was quoted in the London Market in early 1900s.

Pepper can serve as a great ingredient is Non-Veg items, Veg curries and has medicinal value too.

This is A-Grade pepper which is normally exported to foreign countries.

You can get the natural fresh pepper grown naturally.

If you are not satisfied you can ask for replacement.

This black pepper can be directly used for curries and can be grinded to pepper powder using a mixer grinder.

Shipping via India Post - delivery to anywhere in India.