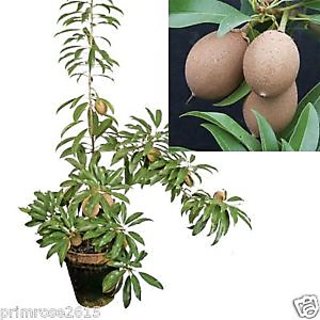 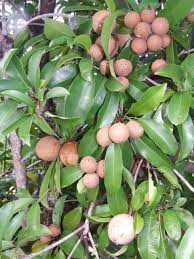 Sapota fruit is a rich source of Sugars (13-18%). Pulp contain sufficient quantity of minerals per 100 grams of pulp. Fully ripe fruits are eaten along with skin (epicarp). Skin can be removed for old and babies. Out of India Sapota is cultivated for the extraction of Chicle gum. Sapota bark has medicinal value.

Sapota is planted in the field in July-August in the prepared pits. The block planting can be done 8m apart in a square system of plantings. If it is to be done on light soils then planting distance may be reduced to 7m. Thus 144 to 169 plants are required for one hectare which should be booked before hand with a reputed nursery.

Under tropical climate sapota flowers through out the year, with two main seasons i.e July-November and February-March. In sub-tropical conditions it also flowers twice in October- November and April-May. The flowers are protogynous in nature i.e., stigma of the ovary becomes receptive earlier than the stamens produce pollen.

Hence, Sapota is cross-pollinated crop. There is sufficient fruit set but retention is low. This may be due many reasons; particularly low auxin level in ovary just after fruits set or due to sudden change in temperatures in December (low temp) and in May-June (high temp). The fruit retention can be improved by spraying GA2@ l00ppm at full- bloom and fruit set. Or NAA @ 300ppm twice. It takes over 10 months for full maturity of the fruit. Sapota is a climacteric fruit and can be harvested when fruits are still hard.

Sapota is a hardy plant and can tolerate scarcity of soil moisture fairly well. For good growth and high yield, plants may be irrigated at an interval of 7-10 days in summer and 20-25 days in winters.

After planting no fertilization is given for the first year. In the second year apply 20kg of farm yard manure and 50g urea + 60g super phosphate plus 20g of Muriate of potash. The following dose is being applied in A.P. and Karnataka.

These doses are applied in two halves first half in June- July and second half in September-October. Under North India conditions October fertilization can be injurious due to cold winters in the coming months.

In the early years of planting when sufficient vacant place is available-some intercrops can be grown. During rabi season, grams/wheat or sarson can be grown similarly in Kharif grow pulses. Keep separate irrigation system the fruit plants. Vegetables can be successfully grown. Care should be taken that root system and scaffolds are noted damaged during ploughing. Papaya can be planted as a filter.

A strong trunk is necessary for a strong framework of the tree. Train the Sapota plants by removing the lower branches on the trunk up to 45cm. the lowest scaffold should be selected at least 50cm above the ground level. No pruning annual pruning is needed it bears on top of shoots in leaf axils.