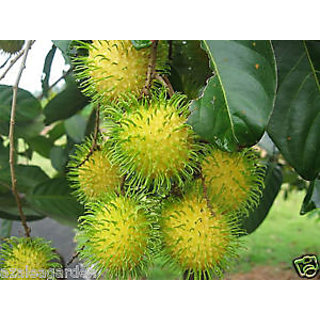 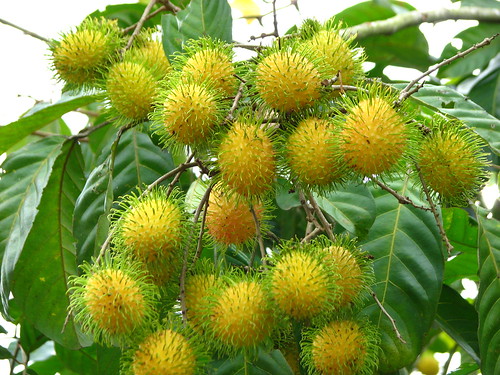 The rambutan Nephelium lappaceum is a medium-sized tropical tree in the family Sapindaceae. The name also refers to the fruit produced by this tree.

Rambutan (scientifically termed as ‘Nephelium Lappaceumis’) is a fruit that definitely features in the list of ‘Most Exotic fruits of Our Planet’. It’s a fruit not a lot of people know about. However, some experts call it ‘super fruit’ because of the many benefits its ingestion has. This fruit resembles lychees in the way it looks- it is red colored on the outside while its inside it white, it is oval in shape and is generally one to two inches in length. Moreover, like lychees, it is also found in bunches with stems sticking out of them. Even though this fruit is said to be native to Malaysia and Indonesia, it is found all over Southeastern Asia. The fruit has a thin, leather like skin layer with multiple tube-like structures sticking out of it that seem like spikes on a hedgehog. Sometimes, one can also find rambutans having greenish yellow or orange exterior skin colors. The fruit, in many ways, also looks exactly like a sea urchin.

The trees on which this fruit grows have some interesting characteristics as well. The fruit grows on trees which are about 10-20 feet (which is nearly 3.05-6.1 m) high. These trees generate cultivable fruits twice every year- a smaller batch during mid spring along with a bigger one at the end of fall. What is notable is their genders (Yes, trees have genders as well). Some of the rambutan trees are male and therefore do not produce fruits at all. Several trees are hermaphrodites, i.e., producing both female and male flowers, while some are entirely female. The hermaphrodite trees, thus, are the most fruitful (pun intended).
The flowers that blossom on these trees have got a fairly sweet aroma and are thus used in flower bouquets. They’re white or even green in color, plus some variation exists in between the female and male flower. Biologically speaking, cross pollination is essential for female trees, in order for them to bear fruits. The rambutan flowers help majorly in this by attracting the bees to their high quality nectar. Thus, without the flowers, there would be no fruit at all.