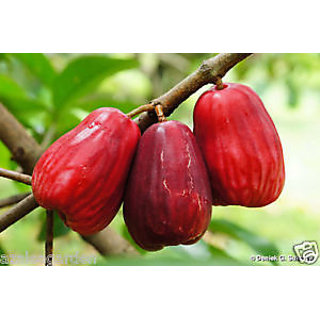 Chambakka, a bell shaped fruit is also known as rose apple, water apple, bell fruit, wax apple, love apple, java apple, mountain Apple, or wax jambu. It is a tropical tree with white flowers and bell shaped edible berry. The colour of the fruit may be white, pale green, rose and crimson. The ripened fruit is red in colour. Despite its name, rose apple resembles apple only on the outside in colour. It doesn’t tastes like an apple and neither has its fragrance nor the density of an apple. Its flavour is similar to snow pear and the liquid to flesh ratio is comparable to that of watermelon.

Rose apple fruit affects the pancreas in diabetics and acts as a block against the conversion of starch into sugar.

Rose Apple are usually loaded with vitamin C and also fiber, a substance which has been proven to reduce cholesterol levels.

The fruit is recognized as a tonic for the brain and also liver. An infusion of the fruit behaves as a diuretic.

A syrupy preparation of the flowers is considered to lessen a fever. The leaf decoction is used to sore eyes, additionally functions as a diuretic and also expectorant and cure for rheumatism.

The juice of macerated leaves is taken like a febrifuge. Powdered leaves have already been applied on the bodies of smallpox sufferers for the chilling result.

The seeds have a glucose in them called jamboline that can be dried and turned into a powder; this powder can be added to water three to four times a day to help reduce sugar in the urine.