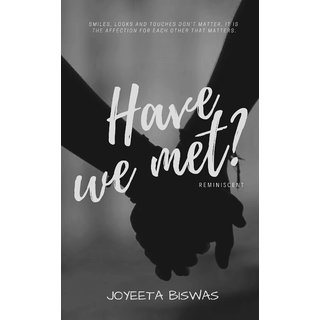 "At that particular moment, I realized that we didn’t love each other because we both were afraid to fall, we both stopped ourselves from doing what was right, because it proved to be wrong for us. I realized him then, I realized what thoughts he had for me. It was that day, I realized that we both loved each other immensely but both hesitated to express it. I feared losing him, he feared hurting me.

I realized only then, that I was in love with him-insanely."

Stay by me, stand by me, even if you are miles away from me, because I fear that I will lose you…

Welcome to the world of Sean and June.

Joyeeta Biswas, is a school student of fifteen years. She is a tenth grader who loves writing, singing and dancing! She was born and brought up in Jamshedpur and now lives in Ranchi.

Joyeeta started off writing short stories and poems at first and then started writing on Wattpad and published short stories. She has been writing since she was eleven and finally she is out with her first book!

She is a big fan of K-POP and really respects her idols whose music encouraged her to write. She is a normal teen-ager with loads of emotions. She is a very fun-loving and friendly person!!

Customer images & videos
Please Note: Seller assumes all responsibility for the products listed and sold . If you want to report an intellectual property right violation of this product, please click here.
Please provide Best Price credentials
Some text some message..