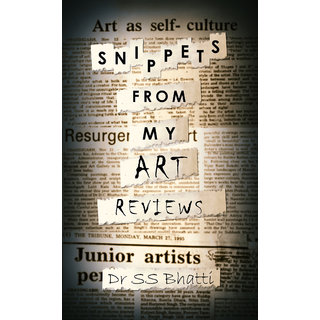 Snippets from My Art Reviews carries some of my art reviews broadly covering the years 1990 and 1991. I found these write-ups when I was rummaging through mounds of old files, typescripts, newspapers clippings, hand-written notes, and much else which the worldly wise would consider rubbish worthy of acquisition only by trash buyers. This material is about one-tenth of the total writings that I had produced over 20 years—and is without pictures which in certain cases had been printed along with the text by The Tribune News Editor’s assistants who published them in the prestigious newspaper.

During my two-decade-long term as the official Art Critic  of The Tribune, leading English newspaper of north-western India, I published as many as 400 reviews of exhibitions of novices, struggling practitioners, accomplished professionals, and eminent artists from India and abroad. It included the exhibition of Henry Moore’s original mini sculptures which Chandigarh Administration had arranged at the Government Museum & Art Gallery, under my chairmanship of the exhibition committee. I reviewed another landmark event that took place on the campus of Punjabi University, Patiala, where Avtarjeet Dhanjal, an alumnus of local Government College of Art and London-based sculptor, had organised an historic workshop in which Indian and foreign sculptors participated. Their wondrous works still adorn the stated venue. These and other exhibitions were truly diverse   including some that showed many works of world-class artistic creations.

About the Author: My name is Surindera Singh Bhatti. Formally trained as an architect at Sir JJ College of Architecture, Bombay, I am founder-teacher and former Principal of Chandigarh College of Architecture, established in 1961. My professional identity is versatile creativity that covers as many as 55 disciplines—art, poetry, philosophy, mysticism, comparative religion, innovative engineering, environmental conservation, etc.  I have earned three PhDs: first one on Chandigarh; second on Guru Nanak’s Gurbani; and third on Golden Temple, Amritsar.  The University of Queensland, Australia, conferred on me the degree of Master of Architecture for my original research thesis on Chandigarh’s Rock Garden. In 1970s I pioneered holistic approach to multi-disciplinary scholastic investigation in many forms of creativity. Having to my credit 700 articles, 100 research papers, 25 books, on wide-ranging subjects, I have won over 20 national and international awards. Despite my many activities and achievements I regard myself to be a Student of Life—forever exploring its awesome immensity with insatiable childlike inquisitiveness.