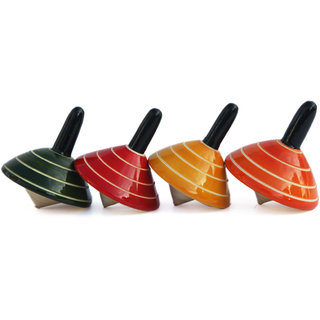 AATIKE’s Buguri (wooden Top) is designed to spin rapidly on the ground bringing lots of Fun & Folic with its whirling and turning!  The toys are handcrafted by artisans of Channapatna. They are very bright & colourful spreading happiness to every child who uses it!

An Ideal Birthday giveaway gifts that brings in the elements of tradition and childhood memories together. Most importantly you will be introducing children to traditional Indian toys, games that are simple and inspired from nature!

Note: The colors used are Vegetable colors and are safe for children

How It Works?
The body of a spinning top has at least one axis, known as a principle axis, around which it spins. When the Top spins rapidly on the ground, the motion of which causes it to remain precisely balanced on its tip because of inertia.  Typically the top will at first wobble until the shape of the tip and its interaction with the surface force it upright. After spinning upright for an extended period, the angular momentum will gradually lessen, leading to ever increasing precession, finally causing the top to topple.
Did you Know?
The Top is one of world’s oldest toys besides ball.  One can find spinning toy’s reference in all cultures of the world! Clay tops have been discovered in archaeological digs that date as far back as 3500 B.C. in the city Ur, southeast of Baghdad, Terra Cotta tops were discovered at Troy that date to 3000 B.C., and Egyptian, Greek and Roman tops have been found dating from 2000 B.C. to 27 B.C